Ica, Perú is an adventure-lovers’ paradise. From surfing those Pacific Coast waves to sandboarding down Huacachina’s sky-high sand dunes, Ica offers tantalizing activities for every thrill-seeker. But even if you aren’t in the market for high-adrenaline experiences, Ica has something for everyone. Marine life fans will love the region’s rich biodiversity, history enthusiasts will be intrigued by its mysterious collection of pre-Columbian geoglyphs and, if you are in need of a drink, Ica will have you cheering with Perú’s signature brandy, the pisco. 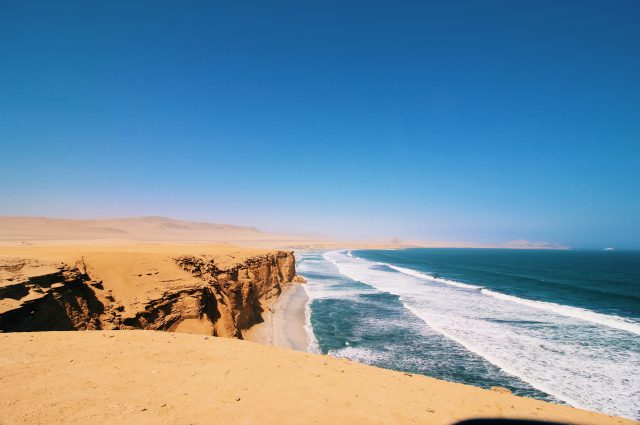 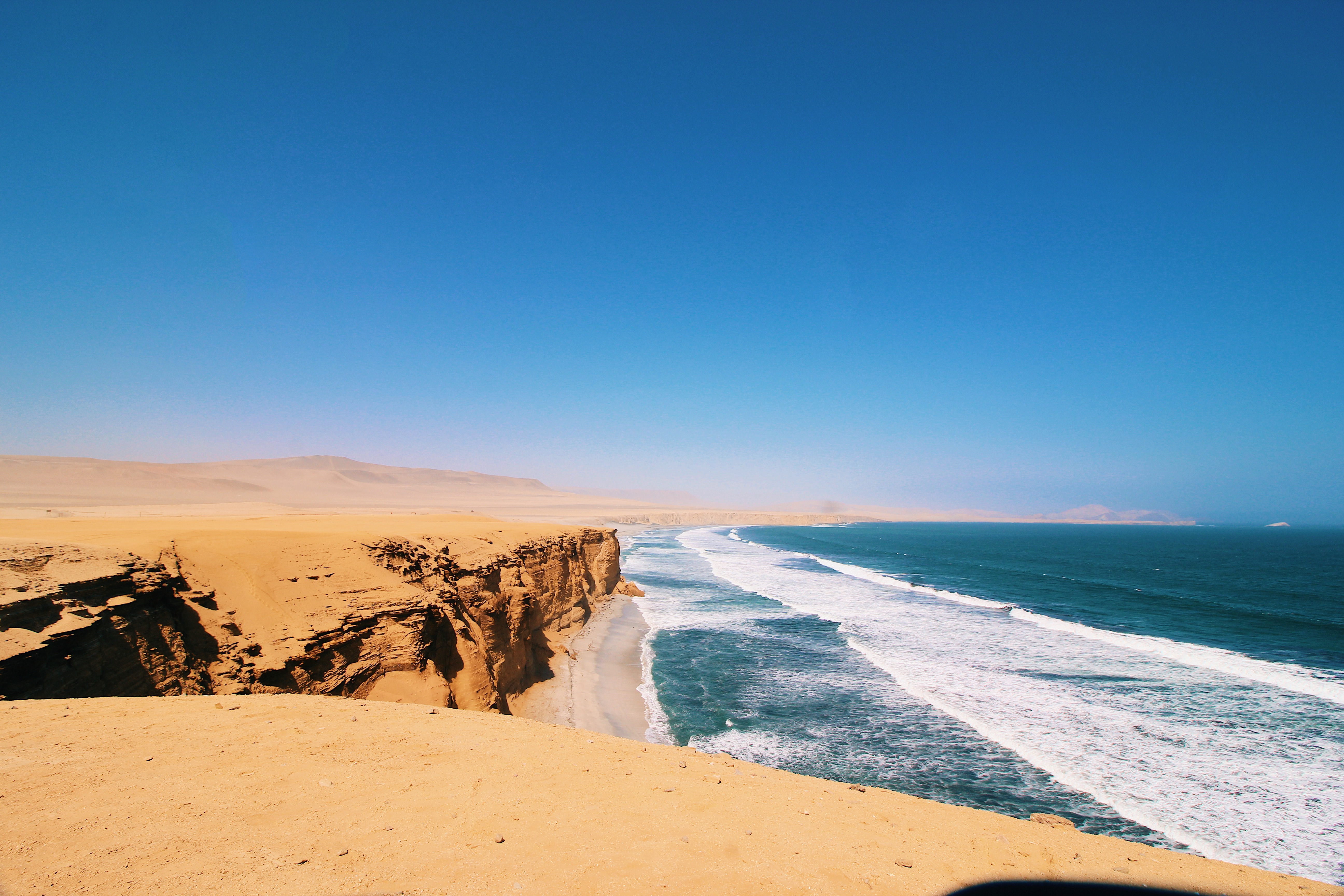 Our 2-day trip to Paracas started bright and early at the Javier Prado bus station in Lima. We took a comfortable Cruz del Sur bus and 4 hours later, rolled into the Paracas bus station ready to pack in all of the sites into our short stay. The manager at the Paracas bus station was very attentive and planned out our itinerary – including ensuring we had transportation throughout. From the station, he arranged to have a driver take us to Paracas National Reserve – one of two Protected Natural Areas that protects a variety of coastal marine ecosystems.

With its intensely beating sun and strong winds (Paracas means “sand storm” in the indigenous Quechua language that inspired our own name Muru Pacha), the Paracas National Reserve perfectly captures the definition of a coastal tropical desert – a beach coastline that meets the arid desert terrain and extends for over 827K acres. Whether you are looking at La Catedral, a unique rock formation in the ocean that prior to the 2007 earthquake had the unique shape of a cathedral, to taking in its untouched beaches, the Reserve has so much to offer. And this only scratches the surfaces. While we didn’t get a chance to explore more of the Reserve due to time, visitors can also enjoy ocean-side restaurants, the Julio C. Tello Museum, which houses a collection of pre-Columbian textiles and other artifacts, overnight camping within the Reserve and even flamingo sightings! 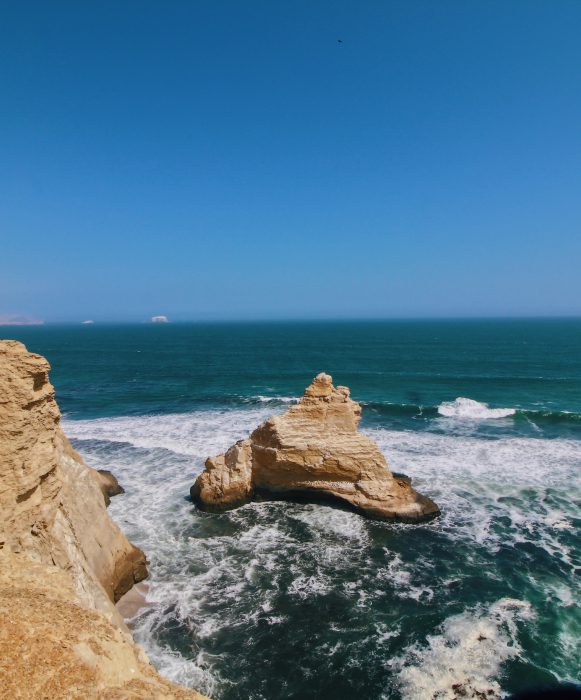 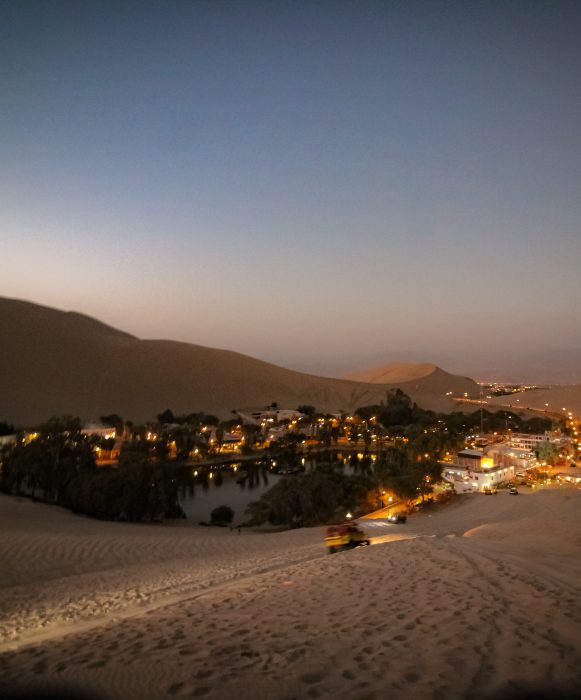 Sandboarding and Buggy Rides at Huacachina

From the National Reserve, we stopped for a quick bite to eat at a restaurant along the side of the road before making our way to Huacachina, located an hour and a half away. Ica’s Huacachina is a desert oasis with a tiny village surrounding Huacachina Lake. The appeal of the oasis is immediately evident upon entering the small town as every street is lined with tour options to explore the surrounding desert – from sand buggies rides to sandboarding excursions. Thanks to the Paracas bus station manager’s arrangements, we already had a 12-person buggy waiting for us when we arrived.

As we slowly left behind the small village and made our way into the surrounding desert, the buggy ride quickly picked up speed and had us all nervously laughing up and DOWN the bumpy dunes. The deeper we got into the desert, the more stunning the views became – particularly thanks to the rolling sun rays bathing pockets of the sandy hills. Throughout the tour, the buggy driver made several stops, our first taking us to a high point in the area to get a great view of the surrounding desert and the neighboring city of Ica in the distance. From there, we went to another spot for some sand boarding – a right of passage of any Huacachina tour! The experience is addictive – no matter how nervous you are the first time you speed down the very tall and inclined sand dune, you’ll want to keep sandboarding over and over again. Thankfully, tour organizers know this and allow for a good chunk of time for visitors to go down the sand dunes at their leisure. The entire experience is capped off with breathtaking sunset views and a final stop to view the Huacachina oasis at dusk – lit up by the village lights.

After such an adrenaline-filled afternoon, we were ready to unwind and what better way to do than with some pisco. Ica is known for its grape crops and the drink derived from these, pisco. The region is so well-known for its pisco production that there’s even something called La Ruta del Pisco or the “Pisco Route” that is lined with a number of vineyards serving the traditional Peruvian drink and a variety of wines.

While we didn’t get to enjoy the actual La Ruta tour, we did get a taste of one of the route’s stops – Bodega El Catador. As it was already nearing closing time, we got to enjoy the tasting room all to ourselves and sampled multiple varieties of El Catador piscos. As she served each tasting drink (which was free!), the amiable El Catador server would encourage us to toast with a different Peruvian saying. Needless to say, with each toast and drink, the laughs got progressively louder! By the end of the tasting, the pisco had convinced us to buy a couple of bottles – including Pisco Quebranta, a maracuya (passion fruit) sour mixer, a lúcuma fruit cream liqueur, and some Borgona wine. 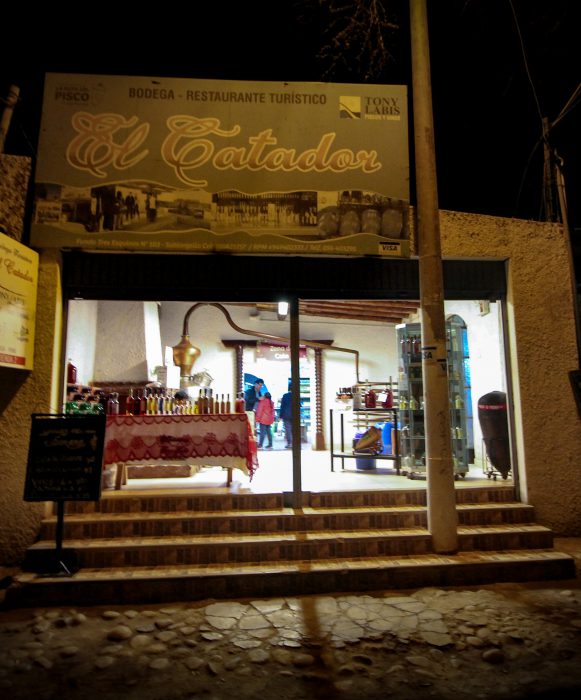 The pisco tasting was the perfect precursor to a restful night. The next day, we made our way to the meet-up spot for the day’s tour – a boat ride out to The Ballestas Islands. The spot where we met is marked by a mural of Don Jose de San Martin, Peru’s liberator, commemorating an important milestone in the country’s history. Paracas and that very spot where we were standing are considered the birthplace of the Peruvian flag after San Martin was inspired by the red and white hues of the region’s flamingos. After this brief history lesson, the 20-person tour group filed into the boat that would take us out to the Ballestas Islands.

The hour-long boat ride to the Ballestas Islands is uneventful with the exception of a geoglyph sighting. There are over 300 geoglyphs, enormous pre-Columbian designs etched into the desert sands, in Ica. While most are best observed from the air, El Candelabro or “The Candelabra” is the exception. Its massive design in a candelabra-like shape along a hardened sand mountain can be seen from the water. Its origin is unknown though many believe it was created by the Nazca culture over 2,000 years ago (though others believe it was made by aliens!). After snapping some pictures of the mysterious geoglyph, the tour continued to Islas Ballestas for a slow boat ride (you never actually get off the boat) around a collection of massive rocky islands with plenty of marine inhabitants. From lazy seals and penguins to a plethora of birds flying overhead, the abundance of marine life is amazing. One curious fact about the islands is that their distinct white coloring is caused by guano or bird poop. Guano is used as a natural fertilizer and, every year, guano collectors come to Ballestas to extract the excrement – gathering over 20 tons every year. After seeing so much guano and “enjoying” its particular smell, our hats go off to these guano laborers! 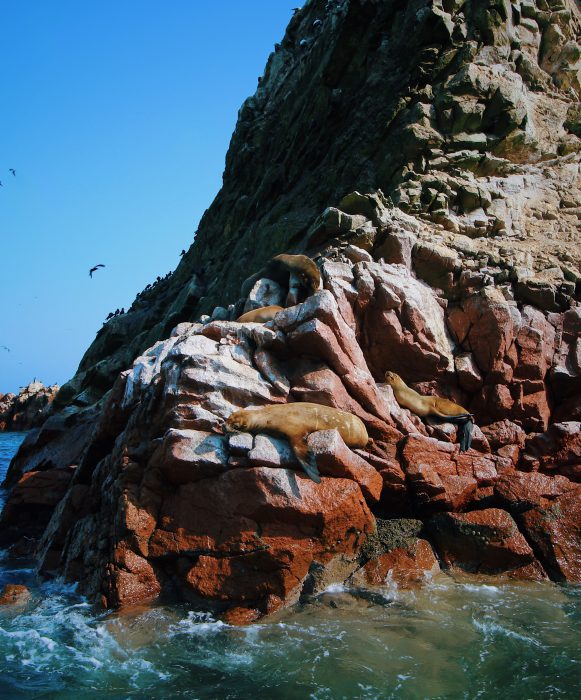 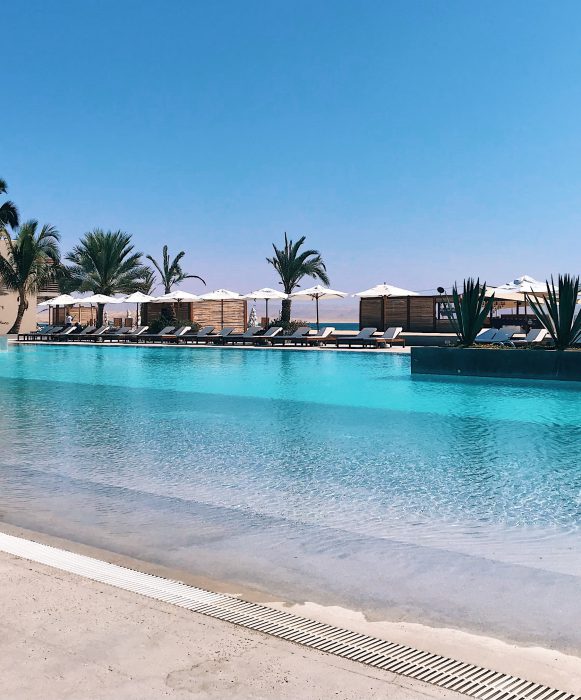 Our two-day tour of Ica couldn’t be complete without some sunbathing action. Located next to the ocean, DoubleTree Resort and Hotel offers comfortable accommodations, balconies overlooking the ocean, and access to a restaurant, bar, and pool. Even though we visited Ica towards the end of Peru’s autumn season, the weather during the day was still warm enough to enjoy the pool without the slew of tourists that descend upon the area in its summer high-season.

The pool area is immense and leads into the hotel’s private white sandy beaches. We opted to stay by the pool instead where we enjoyed a variety of Causas, a Peruvian dish made of mashed yellow potatoes mixed with fish or chicken, and some tasty pisco drinks. To cap off our Ica adventure, we enjoyed a friendly game of Sapito, a game popular in certain countries in South America that consists of throwing a set of rings into the mouth of a brass sapo or frog. 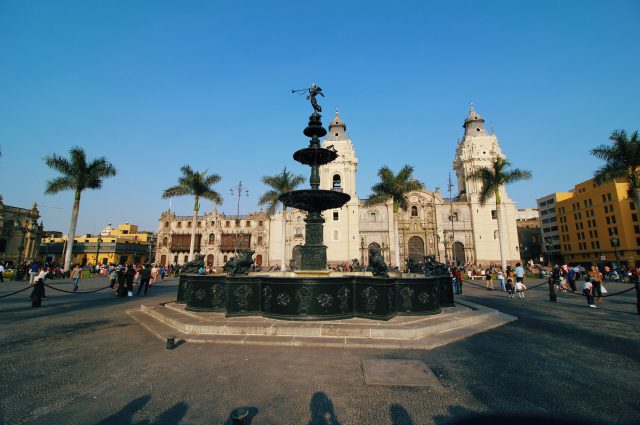 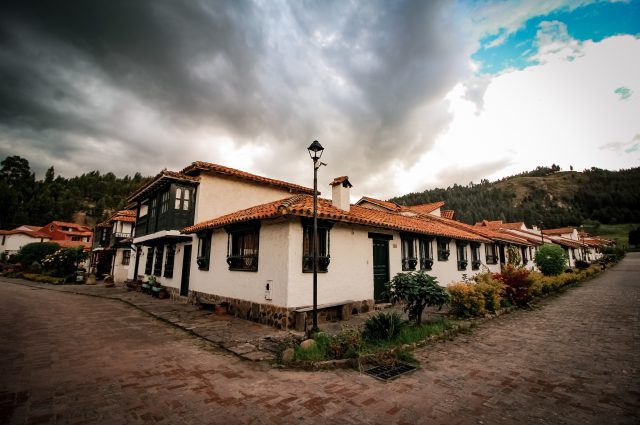 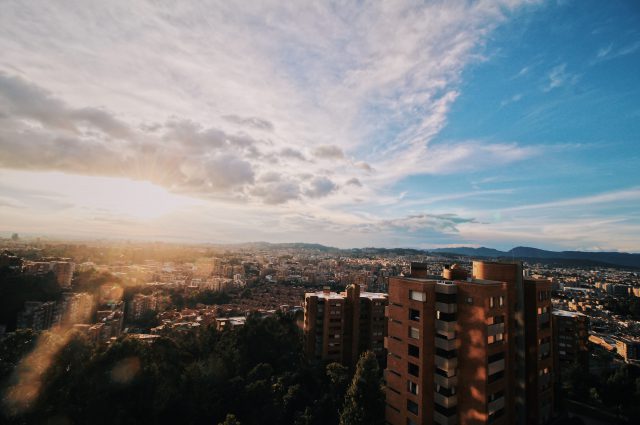